The authors propose a fast iterative method of image inversion into the latent space of a pretrained StyleGAN generator that acheives SOTA quality at a lower inference time. The core idea is to start from the average latent vector in W+ and predict an offset that would make the generated image look more like the target, then repeat this step with the new image and latent vector as the starting point. With the proposed approach a good inversion can be obtained in about 10 steps.

(Highly recommended reading to understand the core ideas in this paper):
1) pSp 2) e4e

1) model architecture
Interestingly, ReStyle is agnostic to the encoder architecture and can be used with any StyleGAN encoder. However, due to the self-correcting multi-step nature of the model the authors sought to reduce the complexity of the base encoder, and used a simplified version of the pSp and e4e encoders (only the 16x16 feature maps are used in the map2style blocks instead of the multiple scales of feature maps in the original encoders) in most of their experiments. The losses from the underlying encoder models are all used as is.

2) Iterative refinement
Each training iteration consists of ~10 repeated steps. At each step the encoder receives the current image (initialized with the image produced from the average latent vector) concatenated along the channel dimension with the target image and produces a set of W+ vector offsets that are added to the latent code from the previous step (initialized with the average latent code). The resulting W+ vectors are given to the pretrained generator to produce an image that is used as the input in the next step.

3) Insights from experiments:
Upon observing the magnitude of changes in the inverted images the authors concluded that their iterative scheme works in a coarse to fine manner, first focusing on low frequency features and then refining the smaller details. In their experiments the authors show that the editability of e4e encoded images remains intact with the proposed modifications.

4) Encoder bootstrapping:
Authors consider the task of creating a cartoon character from an input photo using ReStyle. The obvious way to do this is to initialize the starting latent code with the average latent vector from the cartoon generator, and do ~10 ReStyle steps to obtain the final image. However, a smarter way is to first invert the input image into the real face domain of StyleGAN using a pretrained encoder, and initialize ReStyle’s starting latent code with the resulting W+ vector. Doing so allows to obtain a high quality cartoon reconstruction of the input image in just a few ReStyle steps.

It is hard to definitively judge the quantitative comparison of the methods since there is a tradeoff between inference speed and reconstruction quality. See Fig. 5 in the paper for more details. 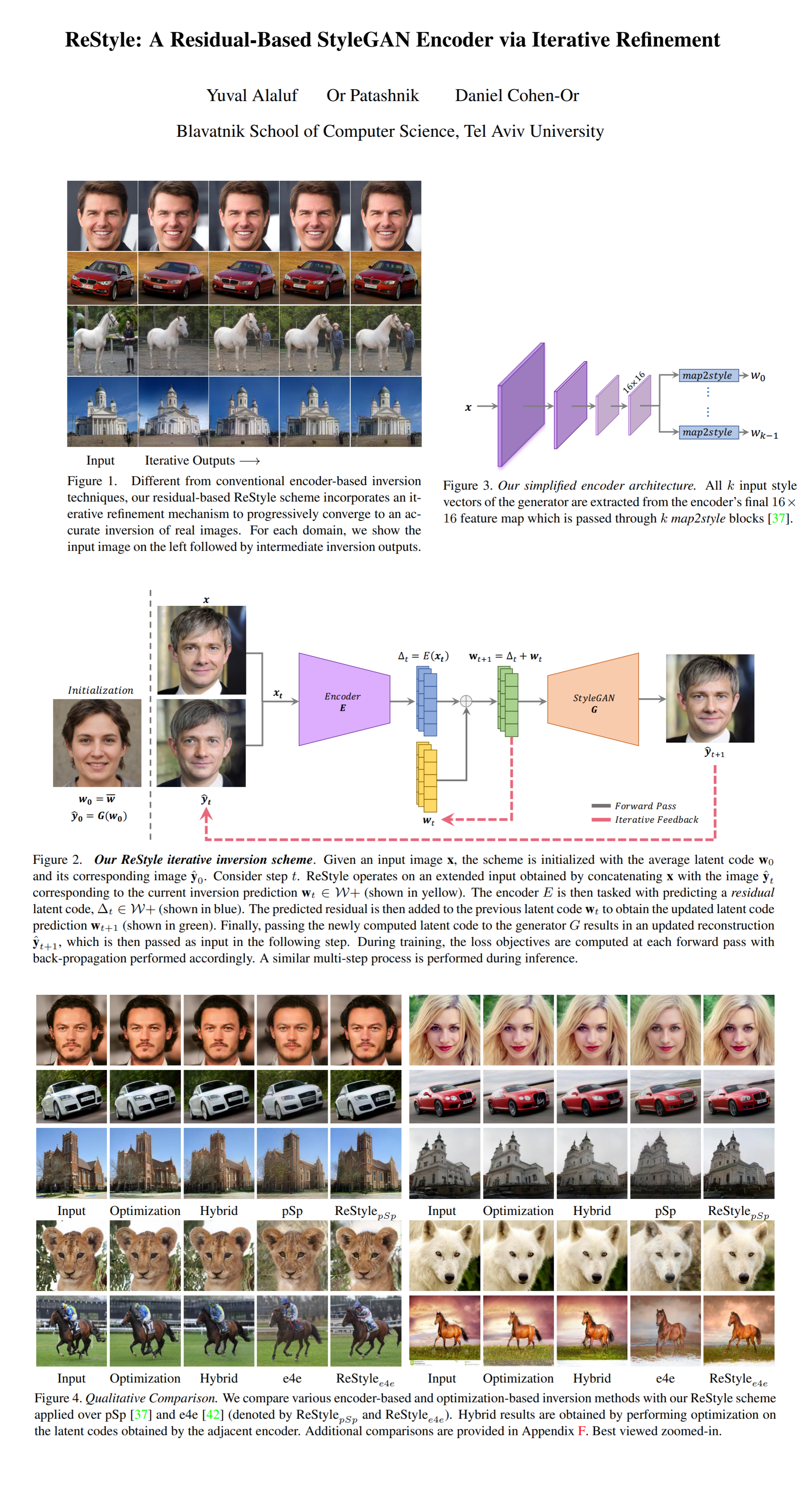