Have you ever taken a still photo and later realized how cool it would have been to take a video instead. The authors of the “Endless Loops” paper got you covered. They propose a novel method that creates seamless animated loops from single images. The algorithm is able to detect periodic structures in the input images that it uses to predict a motion field for the region, and finally smoothly warps the image to produce a continuous animation loop.

1) Overview:
The algorithm takes as input an image to be animated, a binary mask indicating the pixels to be animated, and a general direction of motion. The authors observed that displacement fields suitable for cinemagraph creation can mostly be constructed from a main direction vector together with a small number of offsets. The dense CRF solver is quadratic in the number of displacement vectors , hence keeping that number small is vital to the inference time of the model.

2) Detecting repetitions:
The authors use a two stage approach to generate the displacement field. They first solve a simpler problem in 1D. Specifically, they ample a wide band of pixels around the main direction line going through the center of mass of the masked region. The goal is to match successive occurrences of the repeating pattern (windows, tile, etc). The problem is solved by finding the shortest path spanning the main diagonal of the self-similarity matrix of the band of pixels via dynamic programming. The shortest path has successive, non-decreasing indices of points in both dimensions, and no more than two points can stay on the same matrix row. To avoid a trivial path along the main diagonal (1, 1) -> (2, 2) -> .. (n, n) the elements of the matrix on and around the main diagonal are given infinite weight. The authors found that the best results are obtained when reflecting the original sample width-wise before computing the shortest path and taking the middle part of the computed path.

3) Displacement assignment with CRF:
To compute the displacement field over every pixel in the region the authors choose to fit a CRF on an extended set of motion vectors obtained in the previous step. Since more angular freedom is wanted for assigning motion vectors to pixels, the set of vectors from the previous step is expanded with additional vectors up to 30 degree angular deviation. Each pixel is assigned a starting value extrapolated from the 1D displacement vectors. The CRF solver uses feature vectors from the first two layers of a VGG-16 model to minimize the perceptual distance between each pixel and its displacement. The solution is regularized to stay close to the original guess. Cosine similarity is used as the label compatibility function.

4) Inverting the flow:
An invertible motion field is required to generate video frames via backward warping according to the flow, hence the predicted motion field is subsampled after a gaussian kernel is applied to it. Subsequently, the sparse flow is interpolated to all pixels using a polyharmonic spline with radial basis function. This operation ensures the dense field is smooth, has not holes or collisions and serves as a good approximation of the inverse flow.

5) Video generation:
The first and last frames of the animation are required to be the input image for a seamless loop. However, in most images the periodic patterns are similar but not exact copies of themselves. Therefore, to make a seamless animation loop the authors use alpha-blending between the animation (forward), and a time-shifted version of itself (backward). The alpha value is given by a function that ensure that the blended frames are corresponding to a unit shift for a periodic pattern, and that each animation is multiplied with a zero blend factor exactly at the time of its discontinuity. 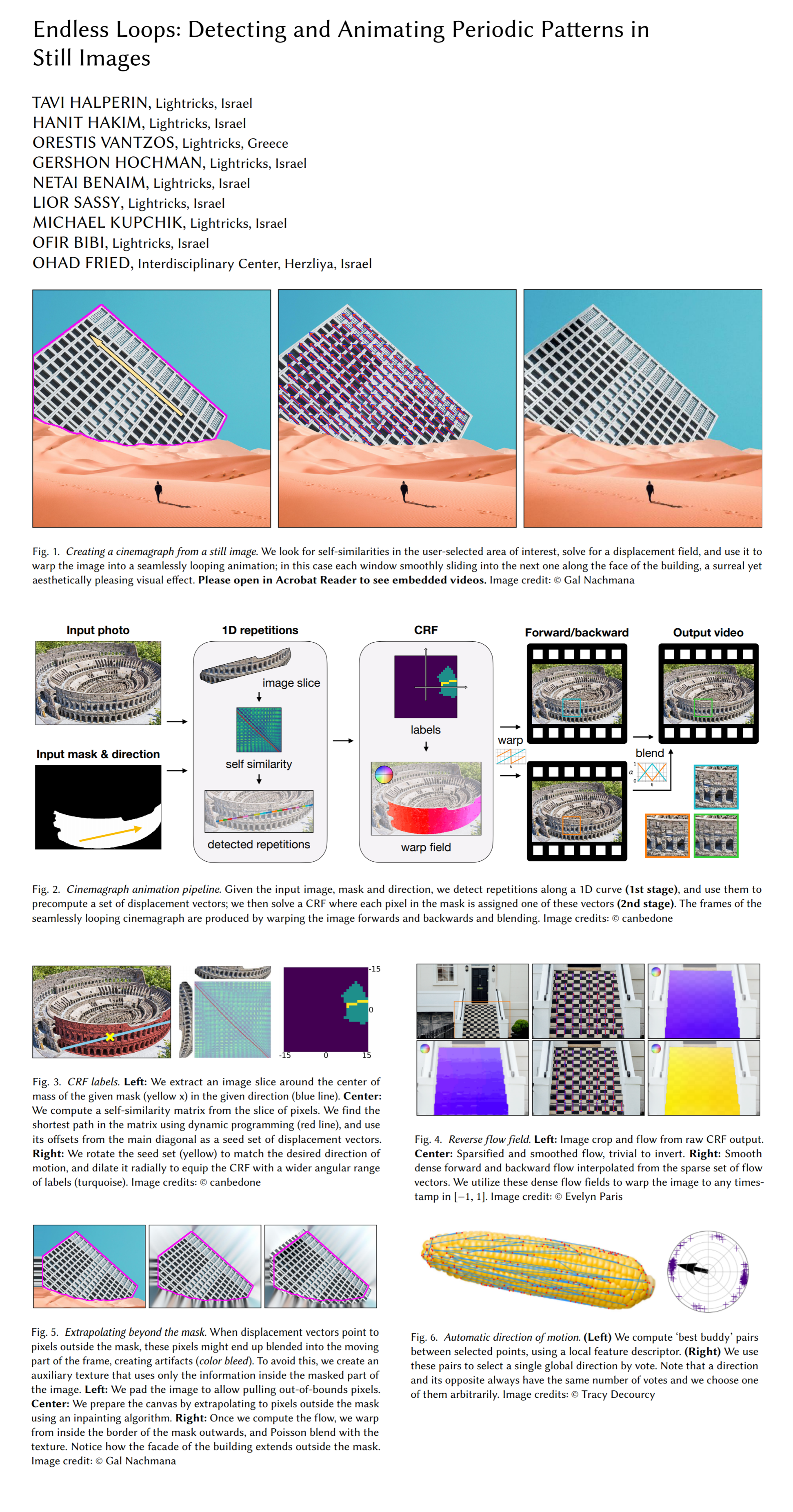